This is a follow up to my previous post regarding the passing of Sam Shepard. I had mentioned in that post how Shepard’s role as Chuck Yeager in the film The Right Stuff had moved me and how sometimes an actor takes on the role of an historical figure that resonates deeply with the popular consciousness.

A friend of mine read the post and responded in this way in regards to that association:
I also think that we miss parts of that era that those real people represented.  People, even over generations, are generally motivated by the same things but that generation, with all its flaws, seemed able to accomplish so much.  The majority of those things were to help build a better country.  Unfortunately, for decades, that has become such a non-priority and people miss that.  They miss it so much that they put someone who isn’t at all qualified to be president but appeals to that part of America that wants that era of greatness.
I have often wondered why that film moves me the way it does. On the outside of my life it reminds me of those days when each launch was carried by all the networks and we followed the adventures of exploration that NASA and the astronauts were conducting. In those days you could send a self-addressed stamped envelope to NASA and they would return it with postcards and photographs, not just of the astronauts, but of spacecraft and satellites. I taped them all to the wall of my bedroom. I was in second grade when Alan Shepard made his sub-orbital flight on May 5, 1961, and while the narrative in The Right Stuff makes dramatic points in regards to previous boosters blowing up on the pad (“our rockets always blow up”)the truth was that we really did not know if it was safe to put man in a can and send him on top of a chemical tower into airless space. That’s why we considered them heroes. And while there was a lot of hype in the media, at heart it truly was a big deal regardless of how the media (which was far less sophisticated and far more trustworthy then) treated it.

But in the inside of my life the story of the film resonates with something deeper: the sense of wonder that we are alive on a planet in the middle of nowhere and that we may be the only ones in the stellar neighborhood. All my life I have felt the mystique of “out there”. I read the classic masters of science fiction when I was a young man, Clarke, Asimov, Bradbury, Simak, Dick, and Wells. (I was never much of a Heinlein fan). And what compelled me to read that genre was its outward facing expression and the sense that humans, technology and science could do anything and go anywhere.

I was sixteen years old when Neil Armstrong and Buzz Aldrin walked on the moon the first time. I am now 64 years old. And this country that I care for deeply is not the same country as it was then. It is difficult to express what I mean about this without avoiding the use of trite platitudes. The Sixties were a time of grand irony. The fact is that the driving factor of all that exploration was the Cold War. We had to beat the Russians to the Moon. There was just no other choice. So we poured billions of dollars into developing the innovations and technologies to get that project completed. At the same time we were pouring even more money into the hell pit of Vietnam. As my friend mentioned we were a flawed generation.
We had the highest of hopes and dreams, and yet we were grounded in delusion. Perhaps that’s not much different than today, but the fact is the we are more insular now, and more selfish. There are a lot of reasons for that and I won’t go into them now, but simply put it seems that we are occupied with the worst sort of trivial distractions that take us away from a real national identity and keep us from seeing the greater good.

The historian Arnold Toynbee wrote that civilizations are driven by challenges and that those challenges are met and solved by “Creative Minorities” that drive the solutions and then rise to the next challenge. But when that minority fails, then everything falls apart.

Here’s a long quote from the New World Encyclopedia that explains all that:
He argues that the breakdown of civilizations is not caused by loss of control over the environment, over the human environment, or attacks from outside. Rather, it comes from the deterioration of the \”Creative Minority,\” which eventually ceases to be creative and degenerates into merely a \”Dominant Minority\” (who forces the majority to obey without meriting obedience). He argues that creative minorities deteriorate due to a worship of their \”former self,\” by which they become prideful, and fail to adequately address the next challenge they face.
(Read the whole article. It’s worth your time.)
It seems to me that’s exactly where we are, and it saddens me. And I don’t think that my disillusion is due to my age, or to the experiences of loss that I have faced these last few years. My difficulties are no different than other people’s problems. Basic stuff really.
However, it would be unfair and falsely disheartening to not acknowledge the fact that we have progressed as a global culture. Technical innovations in communication and information flow have had a positive impact on the lives of many people and communities. (And that’s despite the fact that Sam Shepard said: “I don\t have a computer. I don’t have an Internet. I don’t have the e-mail. I don’t have any of that shit.”) And it is also true that in many ways we are a kinder, more compassionate and less violent world than we were a couple of centuries ago. Steven Pinker has been pointing this out, and wrote about it extensively in his lengthy book The Better Angels of Our Nature.
But at this stage of my life I wonder if we will have the courage as a country to cast off the illusions that are holding us back, illusions that are manipulated by the powerful cynics and selfish greedheads that infest government and industry.
And I must admit to my own illusions. A couple months back I wrote a piece that I did not post because I thought it too gloomy. But I’ll quote from it here:
The Creatives who find the solutions to the challenges that are in some ways initiated by the majority are always a small group. In my own life I have held to the value that there would be more and more of us as time passes, but now I think that this is not to take place in my own lifetime. It is hard for me to admit this. Over the years I have discussed this ideal with people, and while there have been many who agree with me, there have also been those who have cynically called me an “idealist” (as if that was an insult) and have told me that my anticipation of that expansion was a fantasy. While I still think that we will get to that kind of world in the long term, I am not going to see it.
However, this does not make me give up hope. Steven Pinker clearly shows in The Better Angels of Our Nature that humans have inexorably become less violent, and the numbers show it. But that fact does not mean that being less violent is an indicator of a majority of people developing a worldcentric consciousness. And it’s that consciousness that is required if we are to survive as a species on a planet with limited resources and the global challenges of climate change, nuclear confrontation and the unequal distribution of wealth.

I think that we are being tested as a nation, and as a world. There’s nothing new in that. As Toynbee stated, civilization is a response to challenges. But that is also true of our individual lives. We have to rise to our own personal trials, regardless of how much we might want to give up and run away from them.

And that takes faith in the essential goodness of humanity, and of ourselves.
I’m not going to stop being certain of that faith, and neither should you. Don’t let the demons drive you to distraction. After the rocket blows up and you’ve augured into the ground you can only fly upwards again, not to a past that was glorious and now gone forever, but to a future that still holds promise.
Its hard work. No one can do it for us. Life is not about the quantity of money and material objects, or shiny gadgets or the superficial tweets of the sick mind that occupies the White House. As Bruce Springsteen sings in City of Ruins:
Now the sweet bells of mercy
Drift through the evening trees
Young men on the corner
Like scattered leaves
The boarded up windows
The empty streets
While my brother\’s down on his knees
My city of ruins
My city of ruins
Come on, rise up 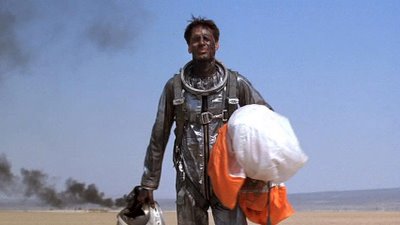 I am very saddened by the passing of Sam Shepard. I admired him as a writer and an actor. His role as Chuck Yeager in The Right Stuff is seared in my consciousness. That final scene when Yeager walks away from the crashed NF-104A with his face scarred and his eyes injured after having gathered up his parachute, walking with determination from the wreckage knowing that he was a better pilot than all those pudknockers who were flying around in cans and who never got a chance to go into orbit and show them who was the best man; my gosh that scene is what life is all about, friends. Sometime you just have to shoot for the stars and if you run out of gas or atmosphere, well, then come back to earth in one piece and do it all over again.
This You Tube clip is an edit of that “pushing the limits” scene. In the original edit the flight is interspersed with a giant party for the Mercury astronauts in Houston, a grand irony in that Yeager is busting his ass while the astronauts are partying with LBJ and watching Sally Rand do a fan dance. (By the way that’s Levon Helm in the beginning of that clip, who also narrates the film, another great American artist who is sorely missed.) In this clip it’s just the flight, and its gut-churning.
It’s noteworthy when an actor takes on a role that defines an entire era, like George C. Scott as Patton. Sam was too smart to be type cast though, and at heart he was a playwright. One of the finest. I saw a performance of Buried Child back in Chicago in 1995 that just captivated me. Actually it destroyed me emotionally through the next full day. A dangerously over the top story that explicates everything nasty about the American Dream, and that seems appropriate for our current experience. Sam won a Pulitzer Prize for that play.
There’s also a little known film from 1980 with Ellen Burstyn, Resurrection in which he has a role as the lover of a woman who has the power to heal after surviving a near death experience. Hard to find it. Saw it once when it was in release. I’d love to see it again.
I have a lot of catching up to do with Sam’s writing. Sometimes the most significant artists make the least amount of noise. Usually they\’re the ones with the most important things to say.
Punch a hole in the sky to where the demon lives! And while you’re doing that, chew a stick of Beeman’s. I think I got me a stick. 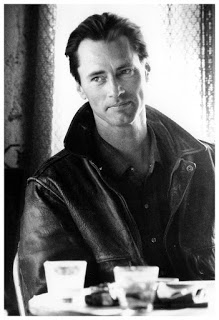